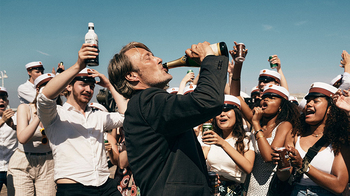 Four middle-aged teachers and colleagues at a high school in Copenhagen, Martin (Mikkelsen), Tommy (Larsen), Peter (Ranthe) and Nikolaj (Millang), are all struggling with frustration and boredom and feelings of being trapped in their jobs and private lives. When they happen upon the works of a Norwegian psychiatrist who claims that the average human feels more comfortable and happy with a long-term blood alcohol content of 0.05%, they decide to test out his theory through an experiment of maintaining constant intoxication throughout the workday in an effort to improve their lives.

Finding that they indeed become more joyful and relaxed from being constantly tipsy, the four friends agree to gradually push their experiment further and further, testing the effects of continuous and increasingly excessive alcohol consumption on the human body and psyche.