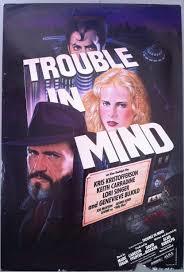 Trouble in Mind is a 1985 American Film Noir (neo-noir) directed by Alan Rudolph. It features Kris Kristofferson and Keith Carradine. Also Divine without drag (although he still looks pretty campy)

The film is set in a Rain City, a pseudonym for Seattle in this case. A couple of a criminally-inclined husband, Coop, played by Keith Carradine and his caring young wife, Georgia, with a child arrive to the city in the same time when a cop (Hawk) is released from the prison where he served a term for murder. They meet in a diner led by a tough proprietor, Wanda (Geneviève Bujold), an older flame of the cop.

Coop also meets a black urban philosopher-cum-criminal, Solo, who leads him futher down the road of depravity. On their path they collide with the local criminal boss Hilly Blue played by Divine and his rival, Nate Nathanson. Coop then starts to transform his appearence under the influence of Solo, from a regular small-town guy he gradually turns into the parody of David Bowie.

Hawk, on his part, has to fight his internal demons, also he without much effort fights Coop to protect Georgia (and at times tries to protect Coop from much worse criminals too). The demons of Hawk are pretty serious as he is not always gentlemanly with Georgia or Wanda.