Film / The Trip to Bountiful 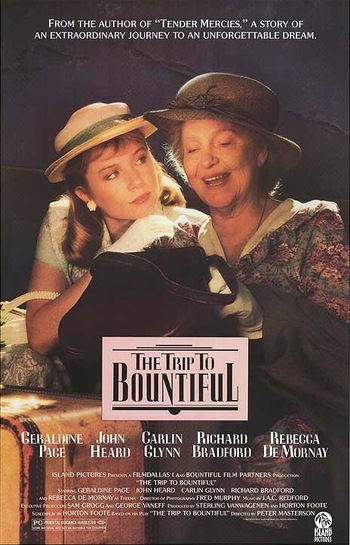 A 1985 American drama film directed by Peter Masterson, adapted by screenwriter Horton Foote from his own 1953 teleplay of the same name.

The setting is 1940s Texas shortly after World War II. Carrie Wright (Geraldine Page) is an elderly widow who lives in a small apartment in Houston with her son Ludie (John Heard) and his wife Jessie Mae (Carlin Glynn). The two women don't get along well, as Jessie Mae is annoyed by Ms. Wright's tendency to run around the house singing hymns, while Ms. Wright doesn't shy away from snooping through her daughter-in-law's space.

Feeling exasperated and suffocated, Ms. Wright has a habit of repeatedly attempting to run away to her childhood hometown of Bountiful. She always gets caught by Ludie or Jessie Mae, however, before she can make it out of the bus station.

This time, however, Ms. Wright encounters a young stranger named Thelma (Rebecca De Mornay) who's going back to her parents' home and decides to help her get to Bountiful. They ride the bus together and share their stories and worries, discussing the meaning of hope, trust, and relationships.

But when they arrive at the last stop before Bountiful, Ms. Wright has to come to terms with learning that her idyllic memories of the town are long outdated; Bountiful has become a derelict Ghost Town, with its last resident—her best friend—having passed away just a couple of days before. Still, she is resolved to pay her last tributes to the town and see it while she can, regardless of what she may find there.

The movie earned Geraldine Page multiple nominations and won her the Academy Award for Best Actress.