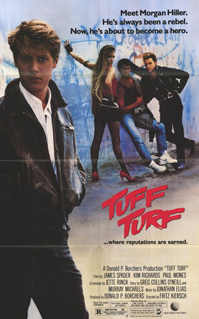 Tuff Turf is a 1985 film directed by Fritz Kiersch.
Advertisement:

Morgan Hiller (James Spader) is a Troubled Teen who used to go to prep school in Connecticut, but is transplanted to California after his father's business goes under. He quickly runs afoul of Nick Hauser (Paul Mones) and his gang of juvenile delinquents when he pursues Nick's girlfriend Frankie Croyden (Kim Richards). His new friend Jimmy Parker (Robert Downey Jr.) backs him up.