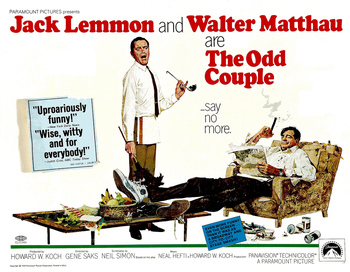 Oscar Madison (Matthau) is a divorced New York City sportswriter who lives in a spacious but horrifically messy Upper West Side apartment. He hosts a weekly Friday night poker game, which includes as one of the players Felix Ungar (Lemmon), a persnickety television news writer. Felix is in a state of grief and despair, his wife Frances having just left him; after he makes an unsuccessful attempt on his life, Oscar takes him in. Comic situations ensue as super neat-freak Felix and slovenly Oscar proceed to irritate the hell out of each other.

Matthau reprised his role from the Broadway production, which had featured Art Carney as Felix. One of many many adaptations of the play, including a popular 1970–75 TV sitcom starring Jack Klugman as Oscar and Tony Randall as Felix, a 1980s Race Lift TV show that featured Ron Glass as Felix and Demond Wilson as Oscar, and another TV adaptation in The New '10s starring Matthew Perry as Oscar and Thomas Lennon as Felix. Thirty years after the movie, Lemmon and Matthau reprised their roles in a sequel, The Odd Couple II.