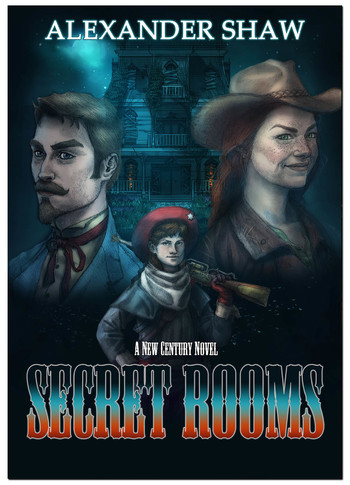 Secret Rooms is an audio drama created by Alex Shaw and is the second story in the New Century series.

America has survived a war of independence, a civil war and a plague that has transformed its people into feral predators. Now humanity needs to pull together or face extinction.

Sharp-eyed doctor James Penrose and foul-mouthed boxer Abigail Grey are new recruits to the Cartographer Scouts, agents of the reunified US government. They set off across West Virginia, a dangerous wilderness now home to the savage victims of the Wendigo outbreak.

Fortunately for James and Abigail their accompanying Captain is none other than sharpshooting legend Annie Oakley. What they find on their journey, however, is like nothing this world has seen before.

The late 19th century alternate America laid down in The Cartographer’s Handbook is explored up close and personal, through the eyes of these new heroes.