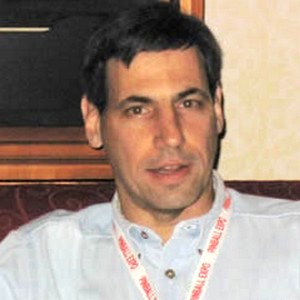 Lawrence E. DeMar (often nicknamed "L.E.D.") is a Pinball and Video Game designer and programmer. He is arguably best known for his work with Eugene Jarvis, the team that created classic arcade games like Defender, Stargate, and Robotron: 2084 as the Vid Kidz.

Larry got his start in arcade gaming at a young age; his parents were good friends with Alvin Gottlieb, head of the Gottlieb pinball company, and so Larry used to play pinball at his home. On a 1974 trip to Paris, Larry was so enraptured by the proliferation of pinball games that he spent much of his time admiring them instead of sightseeing.

While attending college, he found two software bugs in Bally's Eight Ball, which eventually led to a job with Williams Electronics. Although a relative newcomer, he was tapped by Steve Ritchie to develop the software for Black Knight; while Ritchie designed to game layout, Larry created a new operating system for the table, one that support timers and multitasking, allowing for then-unprecedented game rules; it was so flexible that Williams ended up using it on their pinball games for over twenty years.

After working on a few more pinball games, Larry left Williams in 1981, flush from the success of Defender. He joined Eugene Jarvis to form Vid Kidz, where the two developed the classic games Stargate and Robotron: 2084. He returned to Williams in 1984 and rejoined Steve Ritchie to work on High Speed. He has also worked with other notable designers such as Pat Lawlor and John Popadiuk on titles like Banzai Run, Fun House, The Addams Family, and World Cup Soccer.

Larry DeMar became Director of Engineering at Williams in 1995; when Williams left the pinball industry, he stayed on briefly as Director of Slot Machine Design for WMS. Today, Larry owns and operates LED Gaming

, a design company in Wheeling, IL for gaming and slot machines.

Games designed and programmed by Larry DeMar include: