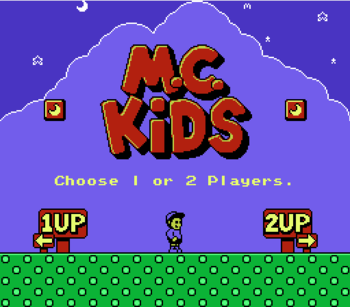 McKids (Occasionally spelled as M.C. Kids and also known as McDonaldLand) is a 1991 McDonald's licensed Platform Game by Virgin Interactive.

The story is the Hamburglar has stolen Ronald McDonald's bag of magic and ran off with it somewhere. Ronald enlists the aid of two boys, Mick and Mack, and sends them on a quest through McDonald Land to get it back. In order to do so, they have to collect puzzle cards, which are hidden in the various stages. Collecting the puzzle cards will unlock new worlds and stages in order to get more puzzle cards and so on, eventually leading to the Hamburglar's Secret Hideout.

You can choose between Mick and Mack at the beginning of the game, and switch between them by hitting blocks with a crescent moon shaped on them, but both characters don't really play differently from each other with no special abilities or attributes.

The gameplay is very similar to Super Mario Bros. 2 in the idea that enemies can't be stomped, but rather grabbing objects to use as throwable weapons instead, or for other uses, like traversing water or creating platforms. The game also has an alternating two player mode.