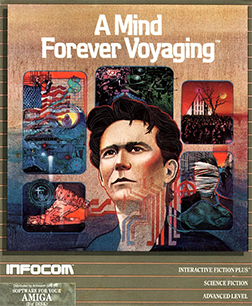 The antechapel where the statue stood Of Newton with his prism and silent face, The marble index of a mind for ever Voyaging through strange seas of Thought, alone.
— The Prelude, William Wordsworth
Advertisement:

A political text-adventure game designed and implemented by Steve Meretzky and published by Infocom in 1985. Really, though, it doesn't really fit the usual preconceptions of the genre... after all, there's only one puzzle and it takes place near the end. The term Interactive Fiction has seldom applied this well to a commercially published game. AMFV is among Infocom's most respected titles, although it was not a commercial success.

It is the year 2031, and the player controls PRISM, the world's first sentient computer. The economy of the United States of North America (USNA) is failing. Great numbers of youths are turning to "Joybooths" (a device which directly stimulates the sensory input of the brain) and committing suicide by over-stimulation. A new arms race involving nuclear weapons no larger than the size of a common pack of cigarettes threatens to turn the USNA into a police state. Initially unaware that it is a sophisticated computer, PRISM has been living for years in a simulation as an ordinary human, "Perry Simm".

Dr. Abraham Perelman, PRISM's "father", informs PRISM of his true nature and gently brings him from simulation mode into reality. Perelman explains that he has awakened PRISM so a vital mission can be performed: running a simulation of a revitalization plan (dubbed the Plan for Renewed National Purpose), sponsored by Senator Richard Ryder. The Plan calls for "renewed national purpose" through de-regulation of government and industry, military conscription, a unilateral approach to diplomatic relations, and a return to traditional and fundamental values. PRISM will enter a simulation of a typical American town — Rockvil, South Dakota — at 10 year intervals following the Plan's enacting, continuing his existence as "Perry", and record the Plan's results... for good or for bad.

One of the most blatantly liberal games of all time, and, depending on your personal politics, you'll probably find either it a sustained headache or one of the most effective uses of An Aesop ever... it especially comes out against hyper-patriotism and the harmful effects of religious fanaticism. The political 'solution' offered at the end appears to be one of pacifism and social-welfare statism. However, the fact that its dystopian worlds are ones that you get to explore yourself makes up for a lot. In any case, it is one of the IF game most frequently cited as an inspiration by the current generation of interactive fiction authors, and worth checking out.

As a side note, author Steve Meretzky said he was directly courting controversy with the political content of AMFV. When the game generated nearly no uproar at all, he "decided to write something with a little bit of sex in it, because nothing generates controversy like sex". The resulting game was Leather Goddesses of Phobos, which was no more controversial but did sell a lot better.