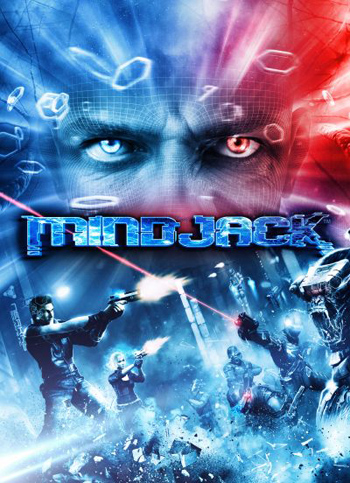 It even has cybernetic gorillas!
Advertisement:

MindJack is a third-person shooter video game developed by feelplus and published by Square Enix for PlayStation 3 and Xbox 360. Unlike most shooters, this game also has a unique feature in that the player can use "mind jackinghacking" to take control of wounded enemies, NPCs on the map and even some robots. The game allows for seamless transition between single- and multi-player modes as well, letting up to four players join one server where they can either help the server host as the blue team or impede his progress as the red team.

The game takes place in A.D. 2031, when the world's governments are in decline and corrupt corporations are rising to fill the void. FIA agent Jim Corbijn is tailing a suspected terrorist known as "Weiss" through San Mira International Airport and ends up killing her contact. Unfortunately, he finds out that the man he killed was an undercover FIA agent. Jim suddenly finds himself cut off from his organization and is forced to rely on Weiss for help. The Action Duo must work together to discover why they are suddenly being marked for death and what secret is so powerful that the Mega-Corp NERKAS will go to any lengths to keep it a secret.