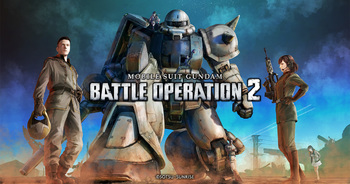 Placed into the role of a mercenary, players engage in team battles against one another at the helm of a wide variety of mobile suits from the "Universal Century" setting of Mobile Suit Gundam, accumulating points for their team by destroying opposing mobile suits, taking control of relay beacons, and sabotaging enemy bases. Battles take place primarily between mobile suits, but players can also disembark from their mechs to accomplish specific tasks on foot, such as capturing relay beacons and performing emergency repairs. New to Battle Operation 2 are maps taking place in the depths of space, where players can move about freely in any direction.