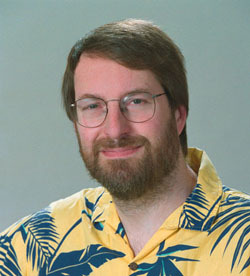 Steven Eric Meretzky (born May 1, 1957) is a PC game designer, best known for the titles he wrote for Infocom and Legend Entertainment. He specializes in the Interactive Fiction and Adventure Game genres. A legend in his field, he's a fixture at the annual Game Developer's Conference, and is one of the 25 'Gamer Gods' chosen by PC Gamer for the impact they had on the hobby. Meretzky's commercial stature has declined as market forces pushed adventure games into the margins, but he remains in the industry as an executive for Playdom, which develops games for social media such as Facebook.
Advertisement:

Meretzky's gift for prose and his sly wit are his claims to fame, and feature heavily in almost all of his works. He intentionally courted political controversy with A Mind Forever Voyaging to boost sales, but the plan didn't pay off. He then decided to use sexual content as a marketing hook instead, in Leather Goddesses of Phobos and The Spellcasting Series, to greater effect. This has given him something of a ribald reputation, but his current output is entirely family-friendly.

He can be seen harrassing MC Frontalot in his video for "It Is Pitch Dark," as the song references many of Meretzky's games.

For Boffo Games, which he co-founded: