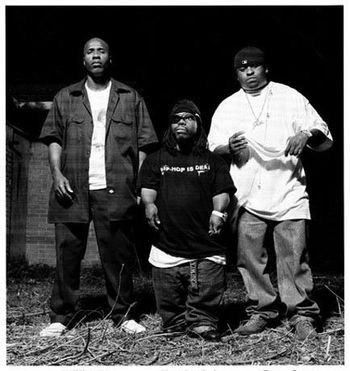 O.G.'s of the south
Geto Boys (originally spelled Ghetto Boys) is a hip hop group from Houston, Texas, consisting of Scarface, Willie D and Bushwick Bill. The original Ghetto Boys consisted of: Prince Johnny C, Sire Jukebox, DJ Ready Red and Little Billy, the dancer who later came to be known as Bushwick Bill. The group released a mostly unheard of album titled Making Trouble. The group broke up shortly after and a new line-up was put together with the inclusion of Scarface and Willie D, both aspiring solo artists.
Advertisement:

The Geto Boys earned notoriety for its transgressive lyrics which included gore, psychotic experiences, Cold-Blooded Torture, homicidal maniacs, people who are extremely sadistic, necrophilia and misogyny, shaping Gangsta Rap and pretty much inventing Horrorcore. Despite the explicit content of their songs, critic Alex Henderson argues that the group "comes across as much more heartfelt than the numerous gangsta rap...wannabes who jumped on the gangsta bandwagon in the early '90s." The Geto Boys broke new ground with their soulful southern sound (a precursor to the Dirty South style).

The group's 1990 album The Geto Boys caused Def American Recordings, the label to which the group was signed at the time, to switch distributors from Geffen Records to Warner (Bros.) Records (with marketing for the album done by WB sister label Giant Records) because of controversy over the graphic portrayal of rape, necrophilia, murder, explicit sex, cartoonish violence, and hostility toward women. The album, however, was actually a compilation, consisting mainly of ten tracks taken from its 1989 album Grip It! On That Other Level, as well as two new songs and one song from its debut LP, Making Trouble.

In the early part of the decade, several American politicians attacked gangsta emcees, including the Geto Boys (most famously Ice-T and N.W.A). A high-profile incident in which Bushwick Bill lost an eye in a shooting with his girlfriend helped boost sales of its third album, We Can't Be Stopped. The album cover had a picture of the injured Bushwick being carted through a hospital by Scarface and Willie D. On the album's title track, the group responded to Geffen Records ending its distribution deal with Def American. "Mind Playing Tricks on Me" became a hit in the hip-hop community.

All three members began solo careers, but Willie D. was the only one who actually left the group. Scarface and Bushwick Bill continued with the Geto Boys, adding Big Mike for Till Death Do Us Part in 1993. Although Till Death Do Us Part was certified gold it was not as well received by fans, as the lyrically gifted shoes of Willie D who also wrote for Bushwick, proved too big to fill for Big Mike. Subsequently, Big Mike was dropped and Willie D returned for 1996's critically acclaimed The Resurrection and 1998's Da Good Da Bad & Da Ugly which Bushwick was not a part of. After years on hiatus, the group reunited to released its seventh album, The Foundation, in 2005. The Geto Boys were featured on Scarface's My Homies Part 2 album.

The Geto Boys' popularity was boosted somewhat in 1999 by the prominent use of two songs "Damn It Feels Good to Be a Gangsta" (bonus song from the Greatest Hits Album Uncut Dope) and "Still" (from The Resurrection) in Mike Judge's film Office Space, now considered a cult classic. The song "Mind of a Lunatic" has been covered by many recording acts including Marilyn Manson in 2003, as a b-side off the album The Golden Age of Grotesque.

The single "Damn it Feels Good to Be a Gangsta" has also been covered by the band Aqueduct and country singer Carter Falco. The song "Street Life" from the album Till Death Do Us Part was featured on the motion picture South Central. A video clip for the song with footage from the film was released.

The band did a rare performance as a reunion at the Smoke Out festival in San Bernardino, CA on October 23rd, 2009. The Geto Boys are credited as the group who put the south on the hip hop music map, and inspired a legion of acts including 2Pac, The Notorious B.I.G., UGK, T.I., Goodie Mob, OutKast, Chamillionaire, Lil Wayne, Juvenile, Mystikal and others.

The group's name, Geto Boys, comes from a deliberate misspelling of the word Ghetto. For the first album Making Trouble (1988), and the second, Grip It! On That Other Level (1989), the spelling was the English standard "Ghetto Boys". For its third album and major-label debut, The Geto Boys (1990), they changed it to the "Geto" spelling, which the group has used since.

In 2019, Member Bushwick Bill sadly passed away from pancreatic cancer, at the age of 52.

Geto Boys are the Trope Namers for:

Tropes associated with the Geto Boys: