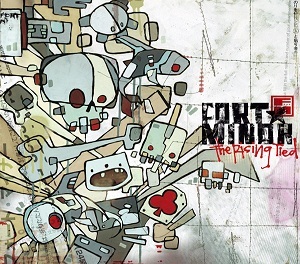 The Rising Tied is the debut, and so far, only album by Fort Minor, the side project of Linkin Park's Mike Shinoda. It was released on November 22, 2005. The album was produced by Shinoda, who played almost all the instruments on record, and with Shawn Carter providing executive production. Many songs feature a guest appearance, with the bulk being his long-time friends Styles of Beyond. It was distributed by Linkin Park's Warner Bros. label, as well as Shinoda's own independent Machine Shop.

The album, along with Fort Minor itself, came to life from Shinoda's interest in exploring his hip-hop roots in-between Linkin Park's hiatus. He described it as "not straight hip-hop, but not rock either". Lyrical themes vary from political elements to songs pertaining to the personal experiences of Shinoda. The album was critically acclaimed, and a moderate commercial success. It debuted at #51 on the Hot 100, and produced the #4 pop hit "Where'd You Go" and the sports anthem "Remember the Name".

As previously mentioned, this remains the sole album of Fort Minor. Largely this is due to Shinoda's commitments to Linkin Park. Though not the best-selling album, it remains a Cult Classic, with sales of 400,000 worldwide.