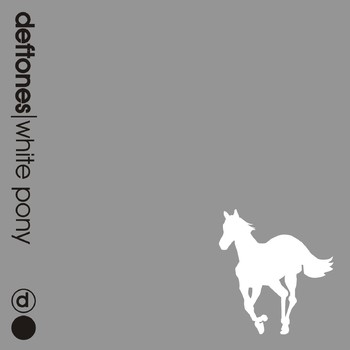 White Pony is the third studio album by California-based metal band Deftones, released on June 20, 2000. It was produced by Terry Date, who had also produced the band's first two albums (Adrenaline and Around the Fur).

The album is regarded as a turning point for the band's sound, showing notable growth and maturing of their alternative metal style through experimentation with influences from post-hardcore, trip hop, shoegazing, progressive rock, and post-rock. It was also the band's first album to feature turntablist and keyboardist Frank Delgado as a full-time band member rather than a featured guest, and also the first album where lead vocalist Chino Moreno contributed guitar parts.

White Pony became the band's first platinum record and still ranks as their highest-selling album, with the song "Elite" additionally winning them their first Grammy Award (for Best Metal Performance). The album produced a number of successful singles, most notably "Change (In the House of Flies)" alongside the promo-only "Digital Bath" (the band's only promotional single to date) and "Back to School (Mini Maggit)".

"Back to School" was actually created after White Pony's completion, the result of the band's label pressuring them to re-release the album with another hit single aside from "Change". They responded in frustration by rearranging the album finale "Pink Maggit" in a half-hour as a joke, turning a section of the song into fast, in-your-face nu metal complete with a Boastful Rap to show their label how easy it was to make a hit. Not only did their label reportedly love it, but when the album was reissued shortly after initial release, "Back to School" got added to the tracklist by the execs against the band's wishes as a marketing ploy — and as the opening track, no less. It did end up becoming a successful single, but the song has since been disowned by the band, although they have performed it live on rare occasion.

White Pony received a 20th anniversary reissue in December 2020 that packaged the original album (cutting "Back to School" to restore the band's intended tracklist) with Black Stallion, a companion album with each song of the album being remixed by various artists (Purity Ring, DJ Shadow, Squarepusher, Mike Shinoda, Robert Smith, etc).

This album contains examples of the following tropes: