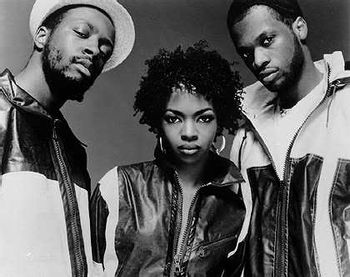 Their first album, Blunted In Reality, is rarely acknowledged, and when it is it's just considered So Okay It's Average. The album became an Old Shame for them after they released The Score in 1996. The album was critically praised and is considered a classic. Notable on the album was "Killing Me Softly", which was a Roberta Flack cover.

After the album, the group split up to for a series of solo careers: Lauryn Hill has had the most successful, winning Grammy Awards, releasing the album The Miseducation of Lauryn Hill (which later became a source of controversy when Hill was revealed to have not written most of the album's music), while Wyclef has had a semi-successful solo career, gaining acclaim for his debut solo album The Carnival and subsequently scoring top 5 hits with Carlos Santana, Destiny's Child and Shakira. Pras focused on soundtrack recordings and acting, though he found commercial success with his song "Ghetto Supastar".

Unfortunately for the group, it was later revealed that Wyclef and Lauryn Hill had been on-again, off-again lovers and that during production of Hill's solo album the two had a nasty falling out that derailed any chances for a full-time reunion (though the trio have done some one-off shows). While Wyclef and Pras continue to record, Hill has become a Reclusive Artist and only sporadically makes new material. In 2007, MTV ranked them the 9th greatest Hip-hop group of all time.

This musical trio provides examples of: