Film / Call Me by Your Name 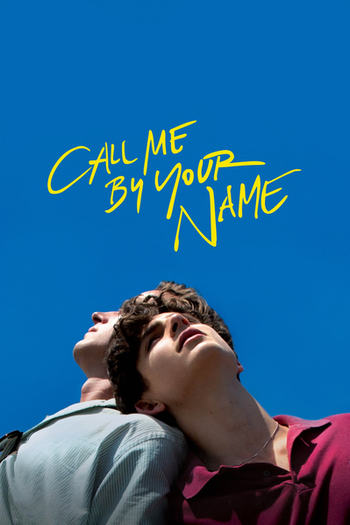 "Is it better to speak or to die?"
Oliver: You know more than anyone around here.
Elio: If you only knew how little I know about the things that really matter.
Advertisement:

Call Me By Your Name is a 2017 coming-of-age romantic drama film directed by Luca Guadagnino and written by James Ivory, based on the novel of the same name by André Aciman. The film is the final installment in Guadagnino's thematic Desire trilogy, following I Am Love and A Bigger Splash.

Set in Northern Italy during the summer of 1983, Elio Perlman (Timothée Chalamet) is a 17-year-old boy expecting to spend another summer idly reading, transcribing and playing music, hanging out with childhood friends, and hosting an unknown American graduate student coming to work with his professor father (Michael Stuhlbarg).

The student turns out to be Oliver (Armie Hammer), an attractive 24-year-old who shares Elio's Jewish heritage. While he is initially put off by Oliver's demeanor, and Oliver feels likewise about him, the two find that their first impressions mask a deep mutual bond. As they explore their connection against the backdrops of the sun-drenched Italian scenery, Elio and Oliver learn more about themselves and each other as their awakening desire builds and takes form.

Development on the film began in 2007, when the rights to Aciman's novel were optioned; between then and the film's release, Ivory stepped down as co-director, and Guadagnino became the director after originally joining the production as a location scout. Guadagnino also curated the film's soundtrack, which features two original songs by Sufjan Stevens ("Mystery of Love" and "Visions of Gideon") as well as a remix of an already-released song of his, "Futile Devices".

Call Me By Your Name contains examples of the following tropes: