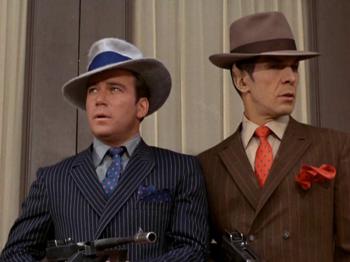 The Enterprise receives a 100-year-old radio transmission from the U.S.S Horizon on the planet Sigma Iotia II and investigates. The person they first contact is "Boss" Oxmyx. Kirk, Bones and Spock beam down to Iotia to find a world very much like 1920s Chicago, only with people not even trying to hide the fact that they're carrying submachine guns. Apparently, shoving one in somebody's face is their way of saying "Hi".

It seems that when the Horizon visited Iotia 100 years ago, they left behind some books. Aside from being virtually identical to humans, Iotians are very imitative and adaptable by nature. There were some textbooks on how to build radios and such, plus a nice little volume called Chicago Mobs of the Twenties, copyright 1992. The Iotians have made this book on '20s mobsters the basis for their culture. And Boss Oxmyx wants "heaters" (phasers) or it's curtains for Kirk.

A Piece of the Tropes:

Captain Kirk has to drive a car on a gangster-themed planet.

Example of:
Are You Sure You Can Drive This Thing?

Captain Kirk has to drive a car on a gangster-themed planet.