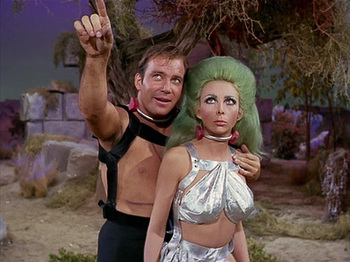 "You see that star? Orbiting it is a planet an early 21st century pop star who dressed a lot like you lived on."

As Kirk, Uhura and Chekov prepare to beam down on a routine mission, they vanish into thin air and Scotty immediately contacts the bridge. "I presume you mean they vanished in a manner not consistent with the usual workings of the transporter," Spock replies. Scotty does - they disappeared with a Stop Trick and the "boing" sound effect that indicates the involvement of Sufficiently Advanced Aliens. Spock, Scotty and McCoy spend the rest of the episode trying to find them in order to add Padding.

Kirk, Uhura and Chekov find themselves on the planet Triskelion, where they encounter kidnapped beings from across the galaxy. A Dracula lookalike named Galt informs them that the Providers have chosen them to become "thralls", which apparently entails being forced to fight one another in BDSM outfits. Kirk, Uhura and Chekov begin their "training" with each assigned a "drill thrall" of the opposite sex. Kirk gets Shanah, a Green-Skinned Space Babe (actually a green-haired space babe) wearing what looks like a very kinky bikini made out of tin foil. Our heroes, of course, refuse to have any part in this and Galt decides to make an example of Kirk by having him whipped. Being Kirk, he manages to turn this into a Fight Scene and subdue his whipper. At this point, the Providers bid on the three newcomers and they become full-fledged thralls. That was quick training. His shirt having been ruined in the whip fight, Kirk goes shirtless for the rest of the episode. Having apparently realized that one Trek cliché has still been left out, Shanah asks Kirk What Is This Thing You Call "Love"?, prompting the usual speech and demonstration.

By this time, the Enterprise has found Triskelion by following the energy trace left by the Providers' teleporter. As Spock and McCoy prepare to beam down, the Providers seize the ship. Kirk convinces the Providers to show themselves and they turn out to be Brains In A Jar. He bargains for his freedom, agreeing to take part in a three-against-one fight. If Kirk wins, all the thralls go free, but if he loses the entire crew of the Enterprise willingly becomes thralls. Kirk wins, of course, and the Providers honor their agreement. Kirk bids farewell to the now freed Shanah.

The Tropes of Triskelion: