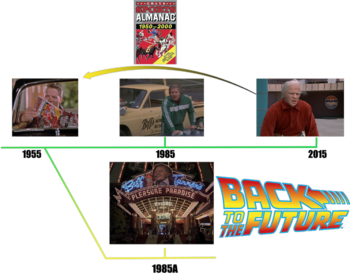 "Sixty years from now, it will be a child's toy. But today, it's the most powerful weapon on earth."
— Vandal Savage, about a laptop, Justice League, "The Savage Time, Part 2"
Advertisement:

The reverse of the Butterfly of Doom, the Timeline-Altering MacGuffin is a nondescript item from the future that, if left in the past, will bring about an Alternate Timeline. This can be something that contains information about the future, such as a history book, for instance. It could also be a future technology that someone in the past decides to reverse engineer. The item will probably become a MacGuffin pretty quickly.