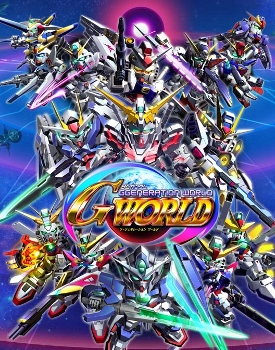 A series of Turn-Based Strategy games developed by Tom Create based on the immensely popular Gundam franchise. G Generation (G Gen for short) has its roots in the myriad SRPG titles made for the Super Famicom in the early to mid-1990s. Most of these games played fast and loose with the rules, but G Gen marked the start of a more serious turn, bringing pilots into the equation and expanding the player's options vastly as time went on.

The games follows a very traditional SRPG gameplay set in place by Fire Emblem and that other robot-oriented strategy series, but mixed with its own squad system. The squad system is based around a unit which leads a squadron of 4 mechs; so long as the other 3 mechs are within the squad leader's command aura (and starting from Zero) they can gang up on a target using support-attacks (so long as their weapons are within range of the target) and can in turn support-defend on the enemy's turn. Also added since Zero, pilots are given Bonus Steps when they successfully kill an enemy, allowing them additional turns. Although a unit can gain unlimited Bonus Steps in Zero and F, Neo limited the amount of potential turns by a character's level, increasing every 10 levels. As a result, battles are often based on careful positioning to take advantage of bonus steps via exploiting the 4-mech support attacks to guarantee a kill for each squad member.

Other mechanics include "evolving" mechs from one unit to their next successor (example: GM -> GM-II -> GM-III, Shining Gundam -> God Gundam, etc). Depending on the game, some mechs have very long and complicated evolution trees, and one can "evolve" a lowly GM all the way up to a Jamesgun, representing nearly 75 years worth of in-universe development.

In general, G Gen games fall into one of two categories:

Any tropes relating to the original characters for the G Generation characters are placed here.

Compare Super Robot Wars, which uses the same general concept as the Crossover games, but includes more than just Gundam.

And many other tropes associated with the Gundam metaseries.