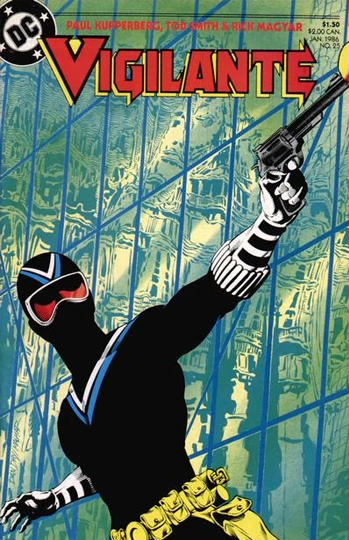 Volume 1
Vigilante is the name of several different DC Comics characters, the very first and most famous one an old west hero who first appeared in Action Comics in 1941 and the others a line of deadly anti-heroes in the more modern age. The three volumes under the title have followed the more modern line of DC's "Vigilantes", starting with lawyer-turned-vigilante Adrian Chase, while DC's longest lasting and most iconic user of the title has had most his tales told in Anthology Comics and alongside the various teams he's been part of, though he did have a limited series in the 1990s titled Vigilante: City Lights, Prairie Justice.

Vigilante volume 1 was an ongoing series that ran for fifty issues from 1983 to 1988, starring the disenfranchised former district attorney Adrian Chase as the title character, and acted as a brutal deconstruction of seeking escapism through a killer vigilante. Adrian left his job as D.A. after his family was murdered in retaliation for putting a mob boss away, deciding the legal system was broken and too many criminals were getting off too lightly. He quickly started to run out of money and let himself be talked into putting in his name for an open judge seat, which he received around the same time he chose to put away the costume. After the next two men who took up the Vigilante costume and name were killed, he felt the need to don it for one last assassination, which went horribly wrong and left him publicly unmasked, forcing him to give up his civilian life entirely and live only as the Vigilante. The writers on the book were Marv Wolfman and Paul Kupperberg.

Volume 2 was a six issue limited series published from 2005 to 2006 featuring Justin Powell. Volume 3 returned to the Chase family, with Adrian's brother taking up the costume and title to try and prove that his brother's idea was sound, and not connected to the more violent and horrific actions of those who were inspired by him.
Advertisement:

Both Adrian Chase and Vigilante debuted in the fifth season of Arrow, but as separate characters. Another live-acion Adrian appeared as Vigilante in HBO Max's Peacemaker. 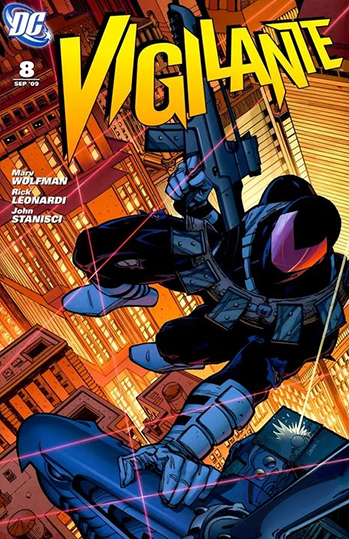