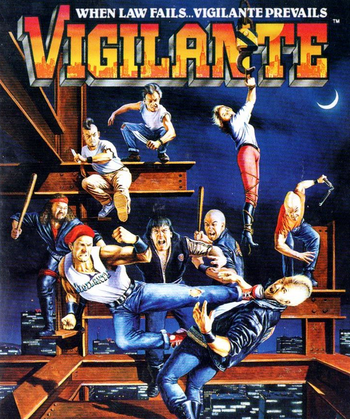 "The police cannot stop the street gangs. As a Vigilante, you must defend your turf!"
Advertisement:

Vigilante is a 1988 single-plane Beat 'em Up game by Irem, the Spiritual Successor to their earlier Kung Fu Master. Originally an Arcade Game, it was ported to numerous computers and the Sega Master System and TurboGrafx-16, with the arcade original finally seeing a re-release in 2019 on Nintendo Switch and PlayStation 4 as part of the Arcade Archives lineup.

In the metropolis of New York City, law and order have broken down. As the Vigilante, you must take the law into your own hands and venture into the mean streets of New York in pursuit of your kidnapped girlfriend Madonna (nope, not her), engaging thugs in street combat.