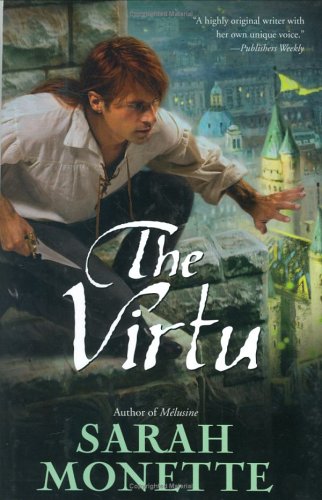 The Doctrine of Labyrinths is a series of four fantasy novels, Mélusine, The Virtu, The Mirador, and Corambis and an additional side story, A Gift of Wings, by Sarah Monette featuring the incredibly dysfunctional Lord Felix Harrowgate, a powerful wizard who nearly managed to put his baseborn past and unsavory history behind him, and his equally-dysfunctional younger brother Mildmay, whose personality is just as fractured and whose past is just as dismal.

Felix is a vain, self-centered ass, and Mildmay attempts to protect him and keep him out of trouble, with varying levels of success. Combine their wildly different personalities, more minor characters than you can shake a stick at, an assload of labyrinths, and even more trauma, abuse, magic, murder, and emotional regression to keep things interesting, and you've got The Doctrine of Labyrinths.

Among other things, the series should be noted for its extremely realistic portrayals of post-traumatic stress disorder, bipolar disordernote  Which, Word of God, Felix has, but lives in a world where diagnosis and treatment do not exist, clinical depression and the personality and behavioral consequences of childhood abuse; the characters never really get over what has happened to them, so much as...work through it to pass for halfway-normal, and slowly, eventually, heal.

Set in a fantasy version of what roughly correlates to the Industrial Revolution-Era Francenote  though in later books they hit a vaguely Victorian country complete with Steampunk magic, the series goes out of its way to subvert, avert, and deconstruct as many tropes as it possibly can, especially the Standard Fantasy Setting.