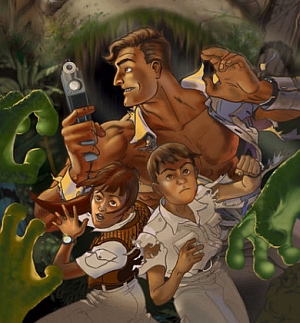 Doc Wilde and the Frogs of Doom (2009) by Tim Byrd has been described as a modern-day pulp novel. An Affectionate Parody of Doc Savage written by a guy who grew up reading pulp tales, Doc Wilde contains a lot of silly humor and really exaggerated situations, and very implausible adventures. Oh yeah, and unlike Doc Savage, Doc Wilde brings his kids, Brian and Wren, along.

Doc Wilde is a researcher/adventurer who is everything a man can be. He's very strong and muscular, very smart, and has enough money to have a giant laboratory and a base on the top of a 106-story skyscraper. His two kids are trained to kick ass, and even their very bedrooms are set up so that they're forced to show some athleticism in order to get out of bed in the morning. There is no "sorry, this mission is too dangerous for you" here - Doc brings his kids with him and actively prepares them to be part of the adventure.

Everything is over-the-top. The two companions who bicker and make fun of each other constantly. The descriptions of the training the Wilde family underwent, having apparently been trained by everything from monks to ninjas to survivalists. Wilde's athleticism puts Sportacus to shame, for that matter. All this in books comprised of dozens of really short chapters, with moments of Bold Inflation when exciting things happen!!

Well, book. The second one isn't out yet and is seeking funding.

Alternative Title(s): Doc Wilde And The Frogs Of Doom