Literature / Deeper Up the Tower 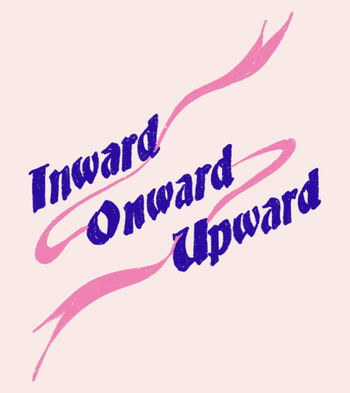 ”You must submerge as you rise”
To the Tower, brave Florian went to the Tower. The Tower with many names. The Tower, the puzzle-box, the wonder. A thing that tempts from the horizons of dreams and skirts the perimeter of notions. Promises are kept in the Tower, or so they say. Reckonings are known in the Tower and things are lost. A terrible price to pay in the Tower"."
Advertisement:

Deeper Up the Tower

is a digital queer fantasy zine written by Creator Chris Revelle and with art and design by Ryan Collier.

The official description is as follows:

“The Tower, the puzzle-box, the wonder, a strange place haunted by shimmering dreams and porous realities, offering ascension, damnation, and everything in between. It beckons to adventurers far and wide to plumb its depths as they ascend and take in its many isanities and marvels. A mysterious knight named Florian enters the Tower on an unknown quest and finds themself wandering through a psychedelic disco fantasy full of mystical animals, queer weirdos, and magic. Each floor brings a new adventure, a new experience, a new oddity. The further Florian goes, the more fluid things become.

The Tower will test Florian—determined to find something they lost, our champion faces the unknown with each passing moment in the wavering walls of this citadel.

The Tower will test everyone.”

Deeper Up the Tower provides examples of the following tropes: