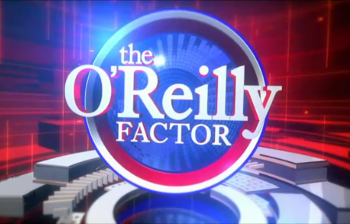 "The spin stops here, because we are looking out for you!"
"Caution: you are about to enter the No-Spin Zone!"
— Bill O'Reilly
Advertisement:

The O'Reilly Factor was a political news and talk show which served as the flagship program of Fox News, and whose host Bill O'Reilly was the face of that network, from 1996 to 2017. It consistently topped the ratings as the most watched cable news show, and its popularity meant it was one of the most parodied as well. Its original title was The O'Reilly Report, which should sound familiar.

O'Reilly has also written several books, some of them tie-ins to the show, some of them not. There used to be a radio show called The Radio Factor, but that died in early 2009.

On April 19, 2017, Fox News officially announced that O'Reilly's employment was terminated amid numerous sexual harassment allegations, and the show aired its last episode on April 21.

The O'Reilly Factor contains examples of: