Page for the characters who made their first appearance in DC Comics events Dark Nights: Metal and Dark Nights: Death Metal, and tropes associated with them. 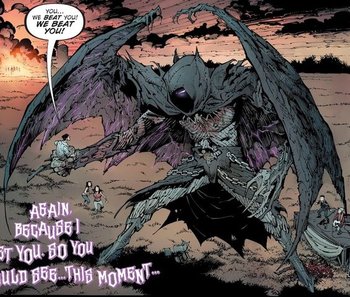 Yes. The truth is you are NOTHING without me. You are plain, less than plain. This place, my realm, it is full of worlds created from fears and failings. And you...you have MORE than any other hero, my son. Whole galaxies of worlds built by the unspoken terrors in your heart. I showed you three but there are thousands. Look around you. People think you are a great hero of humanity. Maybe even the greatest. They strive to be like you, all because I willed it. So when your nature was revealed, they would shrink back to the dark. Now look! Look!!! Because THIS is who you are without my help!

The main antagonist of Dark Nights: Metal, whose main goal is to drag the Multiverse into the Dark Multiverse.

Twisted, corrupted versions of Batman from the Dark Multiverse, who teamed up to drag the Multiverse down with it. They were specifically handpicked by Barbatos because he considered them to be the worst out of all the evil Batmen in the Dark Multiverse. 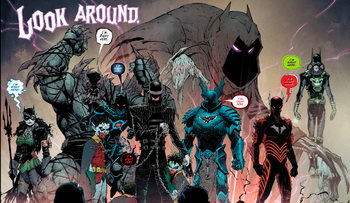 The Batman Who Laughs/The Darkest Knight 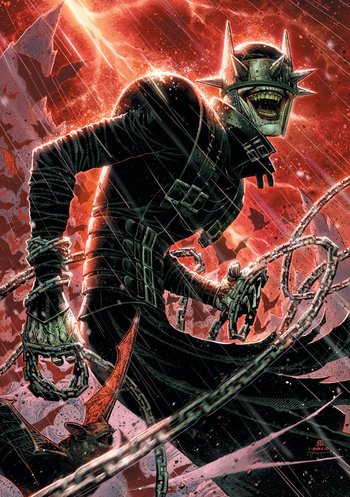 The leader of the Dark Knights, he hails from Earth -22 where Batman killed the Joker, only to be infected with a version of Joker Toxin which "rewired" his mind to adopt the Joker's personality and beliefs. He wiped out all of the heroes and villains of his world before being tapped by Barbatos to spread his brand of chaos to the Multiverse. His prime motivation is to eradicate every hero in existence.

After attaining godlike powers during Dark Nights: Death Metal, he redubs himself "The Darkest Knight". 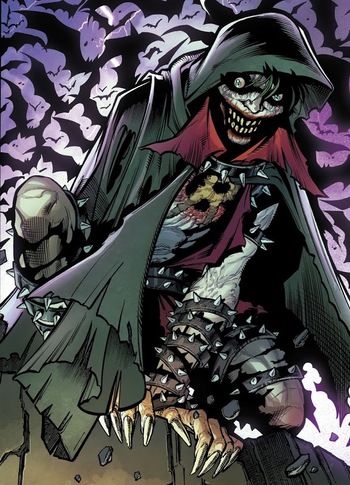 They call us father's greatest fears... but the opposite is true, brother. 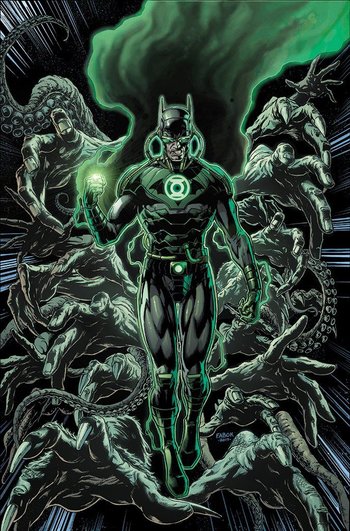 With darkness black, I choke the light! No brightest day escapes my sight! I turn the dawn to midnight! Beware my power.... Dawnbreaker's might!

A teenage Bruce Wayne from Earth -32, who became a Green Lantern... on the night of his parents' murder. 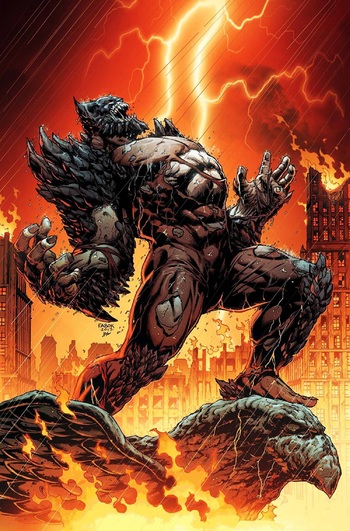 I want you to know that I saved them, Clark. Lois, Jimmy, all of them. Your whole damned city. I finally gave them the strength they needed to see through that easy smile, and that damned colorful shield. I hardened their hearts so that they'll never believe in the cruel fairy tale world you told them was the truth.

Batman from Earth -1, where Superman went mad and Bruce was forced to dose himself with the Doomsday Virus to stop him. 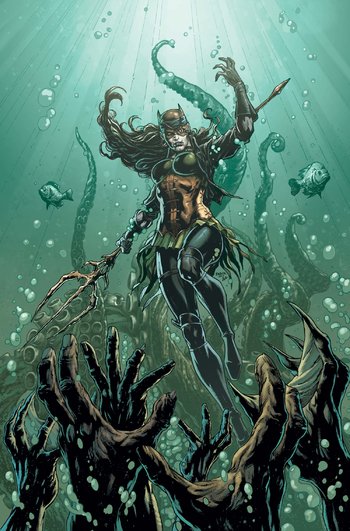 This place, this light, this Amnesty Bay, this world...It's what I'm owed. My name is Bryce Wayne, and I'm here to take it. Payment in full.

Bryce Wayne, Batwoman of Earth -11, where all genders are reversed. She lost her lover, Sylvester Kyle, and waged a war against Aquawoman. 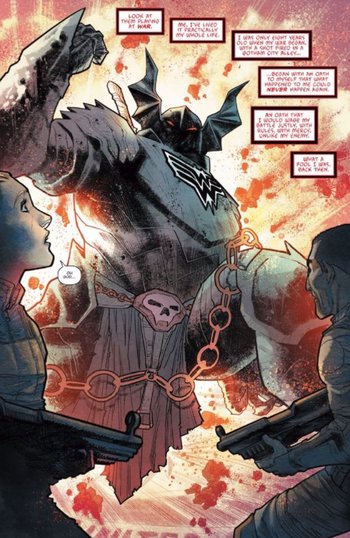 I stare at these so-called...warriors in the war room. They fight like dogs because they can't protect themselves from my presence. You would expect too much from them, Diana. You would expect them to band together, negotiate, compromise. I miss you.

Batman from Earth -12, where Ares attacked the world with a helmet amplifying his powers and killed the Justice League. He took the helmet and used it to kill Ares, after the god seemingly murdered Wonder Woman. Except Ares merely stunned her. When she woke up Bruce had been driven mad by the helmet and killed her when she tried to take it off his head. 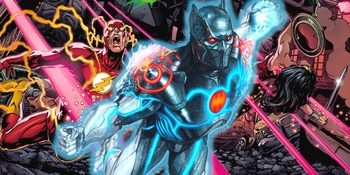 The Batman of Earth -44, where after Alfred's death he and Cyborg created an A.I. based on him, that went rogue and then decided to merge with Bruce and turned him into a killer robot. 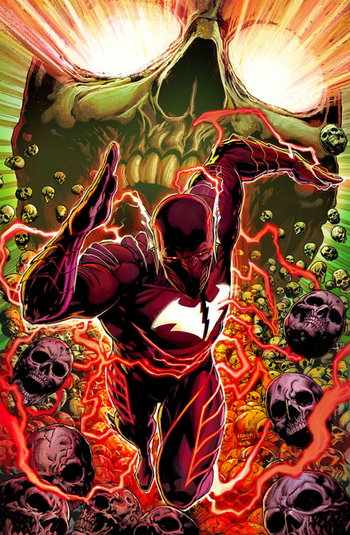 My name is Bruce Wayne. I am Vengeance. I am Justice. I am Batman: The Red Death!

The Batman from Earth -52. After losing Dick, Jason, Tim and Damian he begged Flash to go back in time to save them. When Flash refused, Batman assaulted and forcibly merged with him, becoming a speedster. 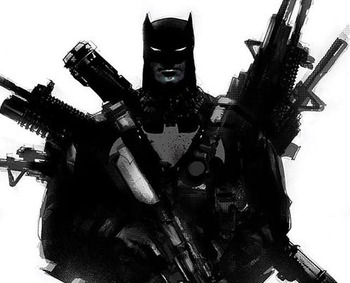 Bruce Wayne of a yet unknown world. When his parents were murdered, he picked up a gun and killed Joe Chill, leading to him becoming a much more violent, gun-toting vigilante. He was summoned from the Dark Multiverse after the events of Dark Nights: Metal by the Batman Who Laughs.

A Bruce Wayne from a world where he uploaded his consciousness into his robotic T. rex as the Batcave collapsed on him. 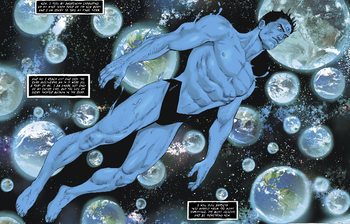 A version of Bruce Wayne that somehow acquired the powers of Dr. Manhattan.

Kull
Mindhunter
A mashup of Batman and J'onn J'onzz.
Night Glider
A Batman with a silver body who rides a silver glider.
The Pearl
Robin King 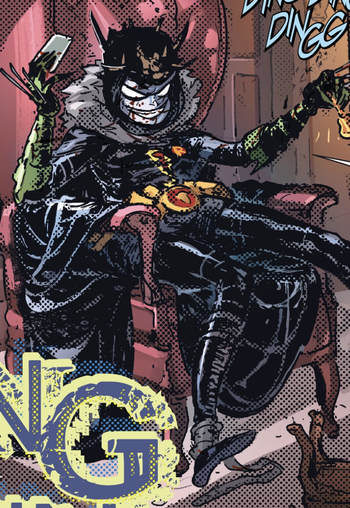