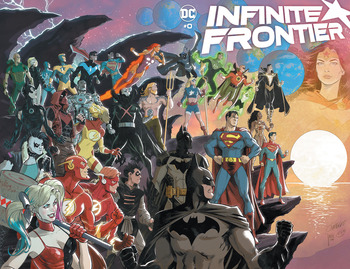 DC Infinite Frontier is a DC Comics relaunch initiative that began in March 2021. This initiative spins out of the events of Dark Nights: Death Metal and DC Future State and serves as both a relaunch and Soft Reboot for the DC Universe.

In the aftermath of Death Metal, the DC Multiverse has been reborn, with Wonder Woman and "the hands" watching over the brand new "Omniverse". With this rebirth comes the chance to build new stories, all the while trying to figure out the mysteries of the two centers of the Omniverse.

Unlike many other relaunches, Infinite Frontier actually continues many numberings and has very few new titles, instead putting other stories into backups, making for bigger books rather than more titles on the shelf. It does, however, have new creative teams on almost every title (with the biggest exception being Batman, which is still written by James Tynion IV), and noticeably draws on a lot of non-comic talent for its writers.

Though it starts in March 2021, releases are spread across the following months.

Tropes appearing in this initiative: