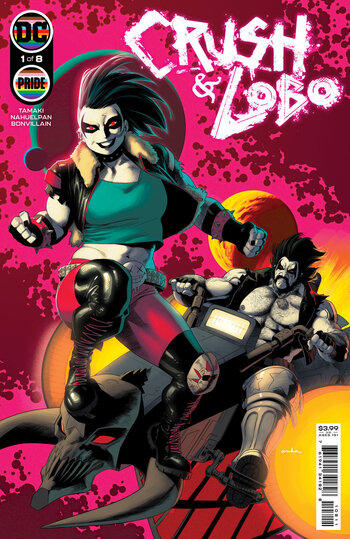 Father-daughter bonding time.
So. Summing up. I ate crayons in school and then my parents were arrested and then I was a fighter for the Teen Titans. Then I quit the Titans. Now I'm freelancing solo butt-kicking. Whatever. Why am I summing up for you? You have internet access, right? Look it up.
— Crush
Advertisement:

Crush & Lobo is a 2021 eight-issue DC Comics mini-series written by Mariko Tamaki, with art by Amancay Nahuelpan and Tamra Bonvillain. It stars Crush and her dad, Lobo.

Crush recently quit the Teen Titans Academy and has gone solo. She's also dating Katie and is determined to be the best girlfriend ever. However, Katie likes, well, pink and other normal stuff, while Crush likes breaking people's faces. When Crush accidentally ruins Katie's birthday party, their relationship is put on pause.

However, that isn't even the biggest event in Crush's life: her biological father, the Czarnian bounty hunter Lobo, has contacted her. Turns out that he's been captured and is in prison, going through some robotic therapy, and has invited Crush to the prison so he can talk about their issues. The last thing she wants to do is talk, but perhaps this will be good for her and Lobo.

Or perhaps Lobo has his own agenda and everything will go to hell in a handbasket.