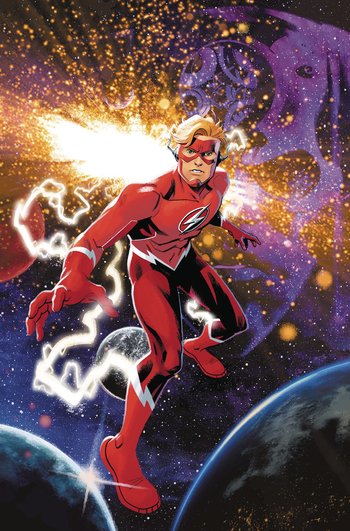 A-ah! Saviour of the Multiverse!
"I am the Flash! The fastest man in the multiverse! I belong on any Earth that needs me!"
Advertisement:

Flash Forward is a Flash comic book launched in 2019, written by Scott Lobdell and drawn by Brett Booth.

In the aftermath of Heroes in Crisis, Wally West is at his lowest point, responsible for the deaths of his friends and fellow heroes and imprisoned. To make matters worse, his former wife Linda Park still doesn't remember their life together or their kids. Wally is ready to give up on life when he is swept away by multiversal guardian Tempus Fuginaut, as he is the only hero fast enough to prevent the destruction of the multiverse.

The story received an epilogue in The Flash #750 anniversary issue, while the collected edition includes material from the unpublished Generation Zero one-shot that leads into the events of Dark Nights: Death Metal.