"I can see all the cracks in your legacy...and how to turn those cracks into the end of the Flash Family."
—Hunter Zolomon 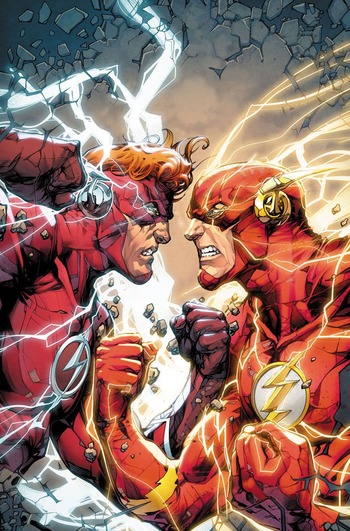 There can only be one Fastest Man Alive!
Advertisement:

"Flash War" is a 2018 storyline in the pages of The Flash (Rebirth), written by Joshua Williamson, with art by Howard Porter, Christian Duce and Scott Kolins. The story takes place in The Flash (2016) #46-51, with a prelude also contained in the series' first annual, although issue #45 also leads into the story in a big way.

Since his return to the DC Universe in DC Universe: Rebirth #1, Wally West has struggled to adjust to a new world that isn't the one he remembers. While he has been able to awaken pre-Flashpoint memories within Barry Allen, he hasn't been able to do this with anyone else, including his former wife, Linda Park, and decides to keep his existence a secret from his aunt, Iris West, for fear of another rejection. Wally's own memories began adjusting to fit the new timeline not long after his return.

Meanwhile, Barry Allen has been remembering some strange things as well, and even encountered Jay Garrick, the original Flash who had been removed from the DC Universe's timeline, although he couldn't remember him. Afterwards, Barry and Iris West travelled to the future and fought Eobard Thawne/Professor Zoom, Barry Allen's Reverse-Flash. The confrontation ended with Iris killing Eobard, before she and Barry returned to their own time. Wally and Iris did eventually reunite, and he restores some of her pre-Flashpoint memories. However, this is also followed by all of Wally's pre-Flashpoint memories solidifying in his mind, and they now threaten to overwhelm him.

Now, to make things worse, both Barry and Wally will be brought into a conflict orchestrated by an enemy they’d forgotten they even had — Hunter Zolomon, the second Zoom and Wally’s own Reverse-Flash. Hunter also remembers the pre-Flashpoint timeline, and with his powers restored and having studied the history of the Flashes thoroughly, he plans to use his knowledge to bring the Flashes to war.