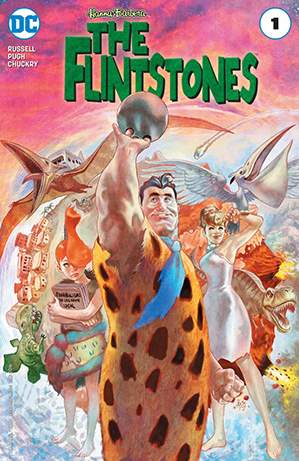 The modern Stone Age family are modern once again!
"There's edgy on purpose, and then there's edgy for a purpose."
—Pan Pizza, RebelTaxi
Advertisement:

The Flintstones is a comic adaptation of the cartoon of the same name, written in 2016 by Mark Russell with interior art by Steve Pugh and published by DC Comics as part of their Hanna-Barbera Beyond initiative. While there have been Flintstones comics in the past, this adaptation is more adult than past comics and generally does not try to mimic Hanna-Barbera's art style. It ran for 12 issues.

Like in the cartoon, the comic follows Fred Flintstone as he tries to navigate a stone age life analogous to modern day. Joining him are his patient wife Wilma, teenage daughter Pebbles, and friends & neighbors Barney, Betty, and Bam-Bam Rubble. Issues are episodic, but with plenty of world building and recurring minor characters.

Note that in this comic Fred gets Dino when Pebbles is a teenager, setting it into its own continuity and thus not acting as a sequel to the cartoon.

The Flintstones comic provides examples of: