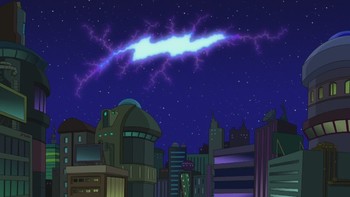 Space-time's a fabric, and it doesn't appreciate getting ripped a new one.
Advertisement:

Somehow, somewhere, something went horribly wrong on a cosmic scale.

Maybe it's a Negative Space Wedgie. Maybe the Butterfly of Doom flapped its wings once too often. The point is, the universe isn't behaving as it should, and this is not a good thing for our protagonists. Whatever the "flaw" is will almost always be very vaguely defined, typically by means of You Cannot Grasp the True Form. Just thinking about might cause a Brown Note-like effect.

Whatever it is, it's almost always causing the world to become more crapsack. If the "error" is personified, it will usually be an Eldritch Abomination. Correcting it may be a goal of the protagonists, but sometimes whatever it is is so far outside their ken that it's untouchable by them.

Contrast Cosmic Keystone, something necessary for balance and stability in the cosmos. The Cosmic Flaw may have been created from weakening or removing said keystone, the result of Upsetting the Balance, a Reality-Breaking Paradox, or The Death of Death. The Reality Warper may fix or cause this. May sometimes happen because God Is Flawed and He made a mistake. The Cosmic Flaw may involve Merged Reality and/or All of Time at Once.

After the Zoni gave the FOngoids access to time-travel, they created paradoxes so dense, it nearly destroyed the space-time continuum.

After the Zoni gave the FOngoids access to time-travel, they created paradoxes so dense, it nearly destroyed the space-time continuum.