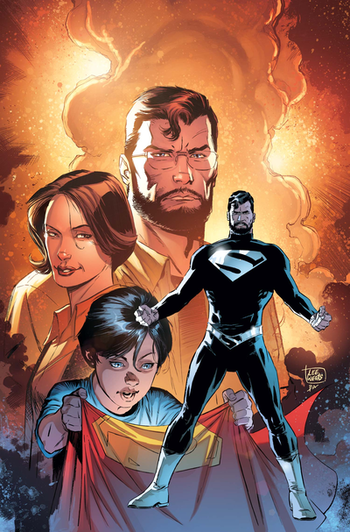 This looks like a job for Superman!
...And his family!
Advertisement:

Superman: Lois and Clark is an eight issue comic book Superman mini-series written by Dan Jurgens that began in 2015. It is one of a number of spin-offs from the Convergence storyline, as part of the DC You initiative. In the aftermath of stopping the Crisis on Infinite Earths, the pre-Flashpoint Superman and Lois Lane, along with their son Jonathan Samuel, have somehow ended up in the New 52 universe. Trapped in a universe not their own, they've taken new identities and are trying to eke out a new life. But new threats are arising and this may be a job for Superman. At the same time, though, Jon is starting to realize there's more to his life than what his parents have said...

This, along with Titans Hunt, are both collected in trade as "Road to DC Rebirth" titles, since they both set up a new status quo of the DC Universe.

Do not confuse with Lois & Clark, the TV show from The '90s starring Dean Cain and Teri Hatcher, though the title is indeed a Shout-Out to the series.