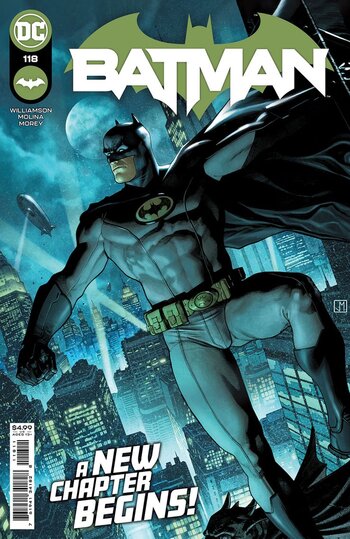 A knight away from Gotham.
Advertisement:

Joshua Williamson (The Flash, Infinite Frontier) takes over the Batman title with issue #118, and is joined by Jorge Molina and Mikel Janin as artists. The run is part of the DC Infinite Frontier initiative and began in December of 2021.

After the events of Fear State, Batman finds himself once again appreciated by Gotham City's citizens. However, this reprieve comes about during a tumultuous time in the Dark Knight's life: his best friend has left Earth, his son has left the nest, he and Catwoman are on a break, Jim Gordon has left Gotham and Alfred is still dead. Before Bruce can take in the quiet, he learns that members of Batman, Incorporated have been arrested for the murder of a villain called Abyss. Bruce leaves to investigate on his own, and runs into the backer of the Batmen he's investigating — Lex Luthor.

Williamson's run also takes part in the Shadow War Bat Family Crossover, alongside two other titles he is writing — Robin (2021) and Deathstroke Inc..

Williamson's run was followed by Chip Zdarsky's, which begins in issue #125. See tropes for that run here.