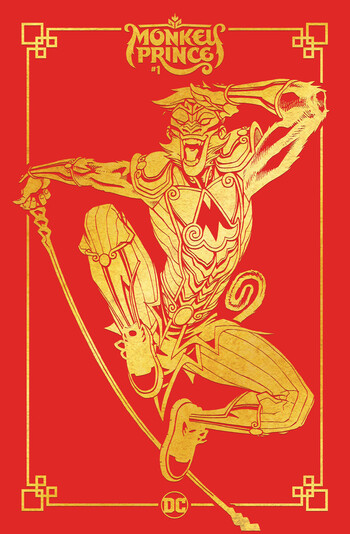 Monkey Prince is an comic book series, published by DC Comics as part of the DC Infinite Frontier initiative. It is written by Gene Luen Yang 楊謹倫 (New Super-Man) and drawn by Bernard Chang 張伯納 (Batman Beyond).

Marcus Sun is a normal kid... who just happens to be the child of two supervillain henchpeople. After witnessing his parents being attacked by Batman as a child, Marcus has panic attacks when he's reminded of the incident. One day, after trying to face his fears, he awakens the powers of the Monkey Prince, and learns that he is actually the son of Sun Wukong, the Monkey King! But Marcus hates superheroes, so he's not going to be joining the Justice League anytime soon — but he is going to embrace his powers as the Monkey Prince!

Monkey Prince debuted in the DC Festival of Asian Heroes special, and the issue has a digital-only prologue issue #0, released in October 2021. The series began an ongoing release on 1 February 2022, fittingly on the eve of Lunar New Year.