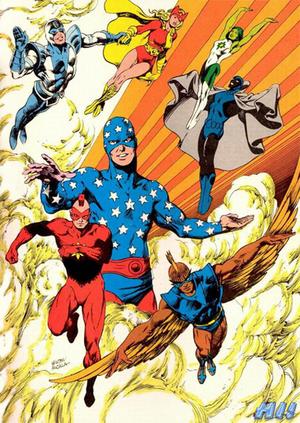 Everything old is new again!
Advertisement:

Infinity, Inc. is a superhero team developed by American comic book writer Roy Thomas in the early 1980s, consisting of members that are children or proteges of various Justice Society of America members. The team was brought together by the JSA's youngest member, the Star-Spangled Kid, for the purpose of showing the worth of the younger generation of superheroes, who felt put-down by their parents and mentors. They existed on Earth-Two, a Parallel Universe which featured the original, now older, versions of many of The DCU's heroes. The original lineup was:

They were later joined by the new Hourman, son of the original; new versions of the Badass Normal heroes Doctor Mid-Nite and Wildcat, who were merely trained by their predecessors; and redeemed villains Solomon Grundy and Mister Bones.

Infinity, Inc. was hit hard by Earth-Two's merging with four other Earths during Crisis on Infinite Earths. With the team rewritten to have originated on the post-Crisis Earth, they were left without much of their backstory, including Batman, Superman, and Wonder Woman. The book continued for just over two years before cancellation.

As adults, most of the 'Infinitors' have since gone on to join the JSA or the JLA as full members.

A new Infinity, Inc. for the twenty-first century debuted in the miniseries 52. They were entirely new characters with no connection to the originals. Steel's niece Natasha Irons was a member for a short time.