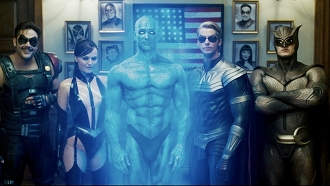 Far left: More Dakka and Determination.
Center left: Badass Normal, Sanity and Most Common Superpower.
Far right: Gadgets and Cool Airship.
Center right: Training, Improbably High I.Q., and Money.
Center: Omnipotence.
"With someone like you around the whole situation changes. You can do anything. All I got to offer is a good left hook."
— Hollis Mason to Dr. Manhattan, Watchmen

In a setting or team with Stock Superpowers, everyone in the cast has some power which is inevitably useful at least some of the time. Much like the real world, some get luckier than others when it comes time to get a power. On one end, you get people with What Kind of Lame Power Is Heart, Anyway?, move into Heart Is an Awesome Power, then into standard stuff and, finally, there are those who won the Superpower Lottery.

Beyond Hard Work Hardly Works, past the inevitable Sidekick Glass Ceiling, someone who won the Superpower Lottery has an unambiguously overwhelming ability compared to everyone else in their reality. There is no actual Competitive Balance. Therefore, a common Fan Nickname for such a power is "Hax", implying it's the kind of power someone who's rewriting "the game" would give themselves. Such characters will invariably end up on the higher levels of Super Weight. This often leads to weaker cast members becoming as irrelevant as mere bystanders, but can outright threaten to remove all conflict to the character, necessitating either Plot-Induced Stupidity, Deus Exit Machina, Poor Communication Kills and other creative ways to keep the story going. And when a villain wins the lottery, it can be an intimidating challenge but can also lead to Only the Author Can Save Them Now and strain Willing Suspension of Disbelief.

Especially careless balancing on the part of the author can send a winner of the lottery straight into God-Mode Sue and Story-Breaker Power territory.

Ways for this include, but may not be limited to:

These heroes and villains are prone to:

If some of the "superpowers" involved are downright harmful, it's Superpower Russian Roulette. See Self Made Super Powers when one takes matters into their own hands.