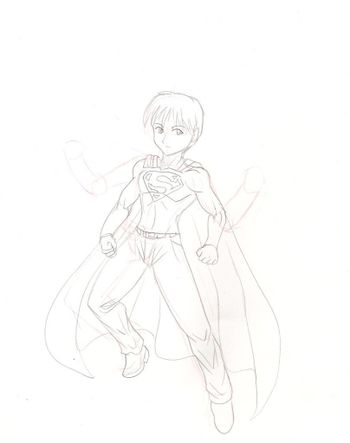 "You will believe Shinji can fly."
Advertisement:

Shinji Ikari is summoned to Tokyo-3 by his father Gendo. However Misato's car gets knocked over by the shockwave of a N2 mine, preventing them from reaching the Geofront in time for Shinji getting into the giant robot and fighting Sachiel, forcing Rei to sortie despite being badly wounded.

To her complete shock and disbelief a flying, super-strong stranger comes along, saves her from getting killed and defeats the Angel with his bare fists before flying away.

Later Misato and Shinji arrive at the Geofront, but Shinji cannot synchronise with Unit 01 for some reason, leading Gendo to summon Asuka Langley Sohryu to Tokyo-3 and send his son away again. Misato though pities Shinji and takes him in together with Asuka.

Before long Misato and Asuka realize that Shinji is quiet, soft-spoken... and one of the most caring, kindest and most compassionate persons they have ever met. Asuka cannot help to be drawn to him, but she also notices that he is abnormally strong and seems to be hiding something.

Unbeknownst to her, her own past also hides secrets... and the survival and freedom of humankind depends on Shinji, her and other people learning the secrets of their pasts and mastering powers and capabilities beyond human understanding.

Last Child of Krypton by Chuckman is a Neon Genesis Evangelion Super Fic that has an interesting premise: What if Shinji Ikari was Superman? The answer is a story that seamlessly combines elements of the Superman mythos with the setting and story of Evangelion, eventually becoming a Fusion Fic of sorts, in which more characters and elements of the DC universe are integrated into the plot.

, although it eventually strays considerably from the original fic to the point it could be considered its own.

Discussion about the story and fanart can be found in SpaceBattles.com in this thread

Compare and contrast with Superwomen of Eva 2: Lone Heir of Krypton, another story where an Eva character gains Superman powers, and with Shinji And Warhammer 40 K, Gods, Angels, and Kings, Thousand Shinji and Children of an Elder God, other Crossover fics where Shinji becomes a badass and/or gains powers due to circumstances that change his personality profoundly and turn him into The Hero... or an Anti-Hero.

Check Advice and Trust, The Child of Love, Evangelion 303, Higher Learning, The Ikaris, Nobody Dies, The One I Love Is..., or Mobile Fighter Evangelion to see other AU Eva fics. Check A Crown of Stars, HERZ, Neon Genesis Evangelion R, Scar Tissue, Walking in the Shadow of Dreams and Neon Genesis Evangelion: Genocide to see other Eva continuation fics. Check Doing It Right This Time, Once More with Feeling, RE-TAKE, The Second Try to see Peggy Sue Eva stories.