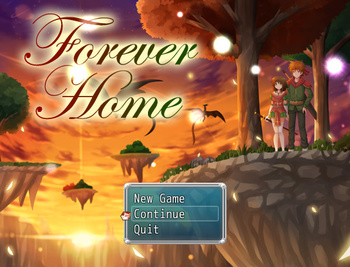 Forever Home is a commercial RPG Maker VX Ace game that was released in 2017 by Pixel Blade Games.
Advertisement:

In a world where everyone has magic abilities granted to them by Prisms, the continent of Auria declared independence from Tren, which the latter nation didn't take kindly to. In response, Tren developed magic war machines such as cannon-like Derrangers and mobile "Dome" fortresses in an attempt to reclaim Auria, though Auria's Blaze Army has them at a stalemate. Unfortunately, something goes horribly wrong in the war that causes the post-apocalyptic Death World shown in the prologue, where the protagonist, Xero, and his companions struggle to survive against remnants of both armies fighting over resources.

The game then cuts to long before that terrible event, where Xero and his childhood friend, Enda, are playing at their favorite hilltop known as "The Spot." Their peaceful life in the humble town of Ellea is cut short when an omnicidal Tren general, Barclyss, fires Derrangers at the town and wipes it off the map. The two are saved by a Blaze corporal, Slash, and thus begins their journey to survive this war, stop Barclyss's wanton mass murder, and find a new home.