Film / The Wizard of Speed and Time 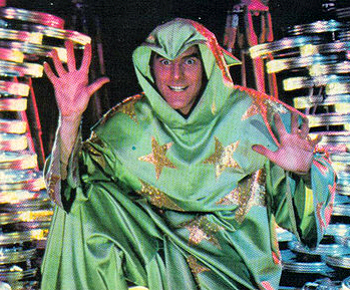 Look for the wizard in the robe of green, for I will help you find your dream!
Advertisement:

The Wizard of Speed and Time was originally a 1979 Stop Motion short film by freelance filmmaker Mike Jittlov. The titular wizard was a speedy green-cloaked fellow (played by Jittlov himself) who ran around the world spreading magic as he went by, until slipping on a Banana Peel sends him flying straight into a pile of film cans, which he proceeds to animate along with plenty of other film equipment to a merry jig.

WOSAT, as it's commonly acronymed, was shown on an episode of The Wonderful World of Disney which showcased special effects to coincide with the release of The Black Hole. It has since been shown around many sci-fi conventions to great acclaim, prompting Mike to remake the short as a feature film... about making the short. After 5 years in the making, the feature film WOSAT was released in 1989 to limited theater showings, but has since gained a cult following through Laserdisc and VHS releases.

By permission of Mike Jittlov himself, the movie has been made available to anyone who wishes to watch it on YouTube (and can be downloaded and spread around, so long as you don't intend to profit from it). It can be found here

It's about a freelancer's exaggerated but all-too-real journey through the corrupt and convoluted Hollywood system, and his drive to defy the system and make his own destiny in filmmaking; that's something that many of us folks can relate to, no?