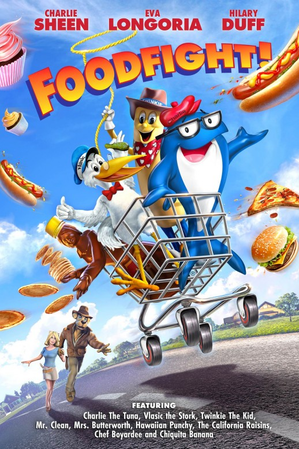 Those tiny characters chasing the cart in the background are the actual leads. Also, the film looks nothing like this.
Advertisement:

Foodfight! is a CGI-animated film. Its plot is essentially Toy Story or Wreck-It Ralph with advertising mascots. Like Delgo, it barely had a release at all. It is notorious for its long and Troubled Production, which started way back in 2002, which entailed, among other things, the theft of the disks containing the animation, so that the production had to start again from scratch. The process of licensing and negotiating with rights-holders for the many mascots took years. The film was completed in 2009. It had an unceremonious limited release in Europe in 2011, and a Video On Demand and DVD release in North America in 2013. With much of the budget being spent on licensing real-world mascots, All-Star Cast, and the do-over after the theft of the footage, the film's animation uses a lot of poorly applied motion capture and questionable rendering.

The story concerns a grocery store that comes to life at night when people are not around. Dex Dogtective (Charlie Sheen) is a top agent of the United Supermarket Defense Association, which keeps the aisles safe from crime, as well as running a nightclub called the Copa-Banana where fellow advertising icons, such as Charlie the Tuna, Mr. Clean and the California Raisins can hang out. The mascots are called "Ikes" for short, although this term is never directly clarified in the movie. After his beloved girlfriend, Sunshine Goodness (Hilary Duff), vanishes without a trace, he ends up stepping out of the detective game. Six months later, he's drawn back in when a mysterious line of products, "Brand-X", has emerged in the grocery store by the machinations of Mr. Clipboard (Christopher Lloyd), and Icons are disappearing or being murdered. With the help of his best friend, Daredevil Dan (Wayne Brady), Dex must uncover the truth behind Brand-X and its Femme Fatale leader Lady X (Eva Longoria) and rally a resistance in order to prepare for, well, a Food Fight.

Not to be confused with the classic trak-ball arcade game

Compare the animated short Logorama, which used a similar conceit.

The evil Mr. Clipboard walks into a store like he's having a stroke, steps on a bag of chips, and then yells out "Survival of the fittest, Leonard!" Yes, this scene was supposed to be taken seriously.

The evil Mr. Clipboard walks into a store like he's having a stroke, steps on a bag of chips, and then yells out "Survival of the fittest, Leonard!" Yes, this scene was supposed to be taken seriously.