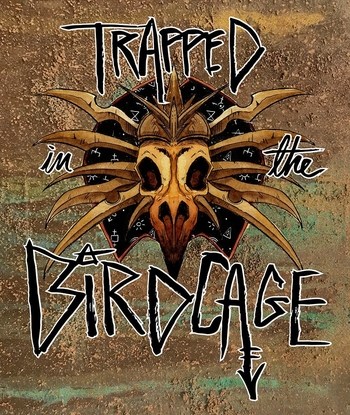 Trapped in the Bird Cage is an Actual Play show hosted by Holly Conrad and set in more-or-less the same universe as Dice, Camera, Action!. It is set 25 years before DCA and in the City of Sigil, which is almost literally the center of the Dungeons & Dragons multiverse.

It starts with four complete strangers being sucked out of their universes and into a closet within a tea room run by an old lady wereraven called Crone, who then sets the newly-formed Crowbar Crew to various tasks which she says are necessary to save Sigil.

Trapped in the Birdcage contains examples of: