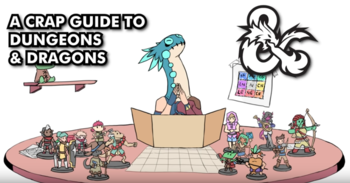 Joseph Catalanetto, aka JoCat, is an animator, graphic designer, and illustrator whose primary output is on YouTube. He was part of HIJEK, and frequently collabs with Whimseyshrimp and Jet Man Jay while streaming; the channel was the primary output place for HIJEK prior to the 2010s. He was also a guest player on The Unexpectables in 2019 for their Tracadia Arc.

JoCat is most known for his comedic "guides" on Dungeons & Dragons, Monster Hunter and Final Fantasy called A Crap Guide, which are narrated by "JoCrap", a persona/original character of JoCat's. JoCrap is both Caustic Critic and a master of Accentuating the Negative... even if there's nothing negative to say. JoCrap teaches the player how to play the games, but does so in the most condescending way possible.

JoCat also streams on Twitch, and occasionally posts edited versions of certain streams on his main channel, initially called "J-Overly Edited", they're now referred to as "Stream Highlights". He also does "Character Creator Critique"s, in which he picks apart different character creators in various games, and he has a video essay on Klonoa 2. On June 23, 2021, he also started running a weekly tabletop campaign, Belkinus Necro Hunt.

His channel can be found here.

Welcome to A Crap Guide to Tropes. *jaunty music plays*

"And now you know how to play a troper. You're welcome."
*jaunty music plays*
Feedback

Example of:
Loads and Loads of Races