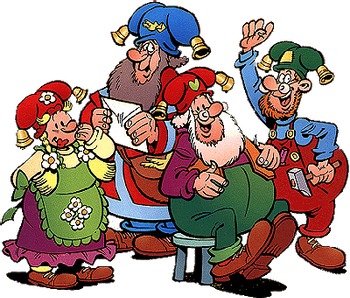 Kabouter Plop note  Plop the Gnome (Lutin Plop) is a live-action Belgian children's series by Studio 100 about a group of gnomes. The main characters are Plop, Klus, Kwebble and Lui. In the early 2000's new characters were introduced: Big Eater Smul and the beautiful Smal. The show first began airing in 1997 on the Flemish station "VTM" and was also aired on the Dutch station 'Zappelin'. The series later gained a french version in 2007 called "Lutin Plop" for the Walloon region of Belgium. The characters from the show are also commonly spotted in various live shows in Belgium.

On September 2017, a third show starring Plop was created called Plop & Felle which introduced a third female gnome as part of the main cast.

The official Youtube channel has tons of episodes from the show's past years including songs.

The French/Walloon Youtube channel can also be found here.