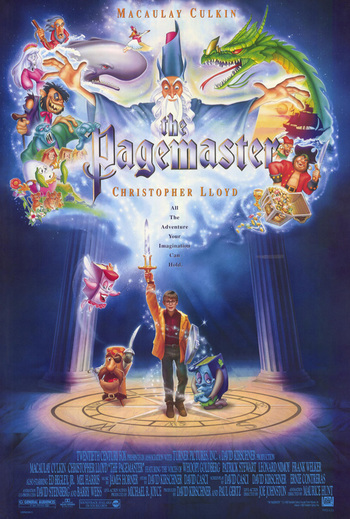 When in doubt, look to the books...
Advertisement:

The Pagemaster is a 1994 film that features both Live Action and Animation, one of only two made by Turner Entertainment's animation unit before Warner Bros. took over (Cats Don't Dance was the other).

Richard Tyler (Macaulay Culkin) is a young boy who is — much to his parents’ annoyance — timid to the point of neurosis. He is tremendously afraid of heights and generally obsessed with quoting the statistical risks involved in countless everyday actions, which, of course, explains why he isn't the most popular guy. One day his father runs out of nails while building him a tree house and sends a very reluctant Richard to buy more.

On his way to the hardware store, a storm suddenly breaks out, and Richard seeks shelter in a huge and luxurious but rather sinister library. The only person there is its extremely enthusiastic and slightly creepy librarian (played by Christopher Lloyd), who is disappointed that Richard merely sought shelter from the storm and isn't looking for books, but affably points him towards the public telephone so he can contact his parents. While wandering deeper into the library in search of the phone, Richard enters a magnificent rotunda with a ceiling painted with gigantic scenes from classic stories, which surround the image of a blue-robed wizard holding a scroll.

The paint descends on Richard, transforming him and the library into an animated world of illustrations where the mystical wizard, the eponymous Pagemaster (voiced by Lloyd), tells him that in order to get home, the boy must face three challenges: The lands of Horror, Adventure and Fantasy. He is assisted by three books which personify those genres (colourfully voiced by Frank Welker, Patrick Stewart and Whoopi Goldberg respectively). Along the way we see references to many classic books such as Treasure Island and The Strange Case of Dr. Jekyll and Mr. Hyde, along with a goodly heaping of puns, while Richard learns to confront his fears and to lead a life of bravery.

The film is notable for featuring great literary figures... without explaining why they were great. It suffered from a lack of success, but earned a small cult following through strong home video sales. It also had tie-in video games, with a PC adventure game and Sega Genesis, SNES, and Game Boy platform games.