Film / The Panic in Needle Park 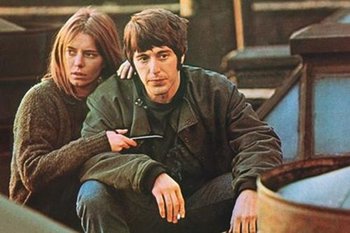 The Panic in Needle Park is a 1971 drama film directed by Jerry Schatzberg.

Helen (Kitty Winn) is a young woman from Fort Wayne, Indiana now living in New York City as an aspiring artist. She has already made some bad choices, as the film opens with her returning from an illegal back-alley abortion paid for (cheaply) by her sleazy boyfriend Marco (Raúl Juliá in one of his first movie roles).

While recuperating from her abortion—she eventually has to go to the hospital—she meets Bobby, a heroin dealer (Al Pacino). Bobby is a lot nicer to her than Marco is, and soon they fall in love. Unfortunately Bobby is a heroin addict as well as a dealer, and he drags her down into a nightmare of heroin addiction and despair.

Al Pacino's first starring role; his performance here was what got him the part in The Godfather. Paul Sorvino appears in one scene as a john who called the cops after Helen stole $75 from him. Author Joan Didion co-wrote the screenplay, adapted from the 1966 novel of the same name by James Mills.