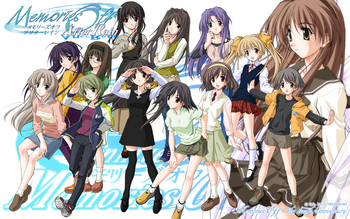 Memories Off (メモリーズオフ Memoriizu Ofu) is a popular and long-running Visual Novel series by KID, with its first game released in 1999 on Play Station. Trying to follow both fashions of non-hentai visual novel and Utsuge genres started by Tokimeki Memorial and Kanon respectively, the game became the model for the following direct to console visual novels.

Even if the game has never been released out of Asia, it is a cult title for most Japanese visual novel gamers, and has led to many spiritual sequels set in the same universe. All of them follow a similar formula: an Ordinary High-School Student has started dating the girl of his dreams... but something happens, and their relationship breaks. The player can try to start over with his ex-girlfriend, or pursue another girl, all of these in a nostalgic and romantic atmosphere with some comedic elements. On the fandiscs, the setting is much more funny and with fanservice elements.

KID started developing a large series based on the first game, with eight games released at the moment and all of them ported to at least three platforms along with several fandiscs and Gaiden Game. It also inspired an otome game spin-off, Your Memories Off: Girl's Style. The first five games have also been adapted into anime OVAs.

The series has been announced to be followed up with a new visual novel called SINce Memories.