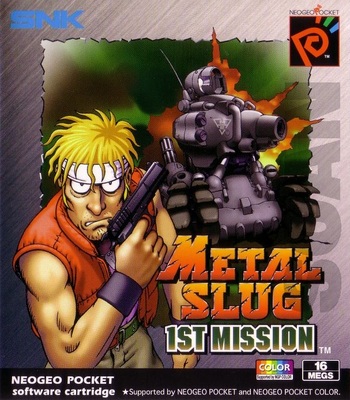 The cover for the first game.
Advertisement:

Metal Slug: 1st Mission and its sequel 2nd Mission are two spinoffs of the popular run and gun series released in 1999 and 2000 by SNK for the Neo-Geo Pocket Color. While Marco's Unnamed Lookalike's adventure in 1st doesn't have much of a plot, 2nd details the first encounter between the Rebel Army and the Mars People as recruits Gimlet and Red Eye move in to stop their negotiations.

The two games make a good job in condensing the series' spirit to a pocket's size with the usual hectic action and detailed animation, but come with more platforming-focused and sometimes maze-like level design. Interestingly, both feature far more levels than the arcade games and have an unique route system: stages where you pilot a Slug force you to keep the vehicle until the end. Getting blasted out of it sends you into an escape mission and then a different and longer route, so there are various possible ways to get to the end depending of the player's skill.

While Metal Slug Advance can be seen as a Spiritual Successor to these two, the 2010 Metal Slug Team Mission mobile game is unrelated.

Those games feature the following tropes: